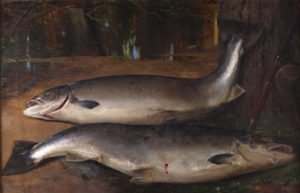 William Geddes was born in the east Perthshire town of Blairgowrie. A self taught artist, he became a central figure of a small group of painters who gathered in the town and became known as ‘The Blairgowrie Boys’.  Their fame was largely contained to the locality, but the growing reputation of Blairgowrie as a favourite place for artists, encouraged others to settle in the town.

William Geddes became well known as a painter of scenes from Scottish life and especially as a painter of fish.  He was also highly regarded for his witty and popular writing.  Among his achievements was a joint commission from Andrew Carnegie, the American steel magnate, for a painting commemorating Carnegie’s visit to Dumfernline – this can now be seen at the Carnegie Birthplace Museum.

William Geddes married Margaret Ewan and had eleven children, including the artists Ewan and Robert Smith Geddes, before finally settling in Gowanbrae, where he converted the outhouses into a studio.  He died in Blairgowrie in 1884 at the age of 44 after a long illness and is buried with his parents at the Hill Kirk.

From the mid 1860s, William exhibited regularly at the Royal Scottish Academy in Edinburgh and was also a member of the Scottish Arts Club.  William Geddes had a reputation for having a pleasant personality and for being a generous and witty host, with a wide circle of friends including artists and gallery owners, as well as local families in Blairgowrie, chiefly the Grimonds of Oakbank.  He is associated to a number of artists, including David Farqhuarson, William Dickson, James Michael Brown and Thomas Burnett.

The Day’s Catchis an exceptional example of William Geddes’ work, with a prize pair of salmon majestically lying next to the angler’s rod and spool, their silver scales shimmering in the chinks of light shining through the undergrowth on the riverbank.three dimensional feel to the painting. William Daniels was fascinated by the interesting characters who frequented the Liverpool docklands, so much so that the art critic Marillier, is quoted as saying ‘Unfortunately a taste for low life and convivial associations spoilt his chances anddestroyed his excellent promise’. However, despite this William Daniels enjoyed success as a painter of portraits, history and genre, exhibiting two works in London at the Royal Academy in 1840 and 1846.

William Daniels’ work is represented in museums in Liverpool and South Kensington in London. The Card Players, a very similar composition to this fine work, can be found in the National Museum in Liverpool.