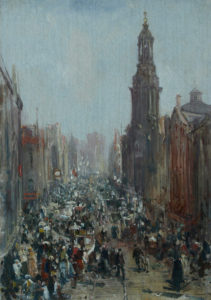 William Webb was born in Manchester in 1862 and was almost entirely a marine artist, a painter in oils of coastal scenes. He was a prolific painter, influenced, like so many aspiring artists of the era, by the great master J M W Turner. Although his work cannot be compared in the same breath with the genius of Turner, Webb developed a style so totally distinctive that he could not be likened to a mere copyist. Many of his pictures show scenes in the Isle of Man, but he also travelled quite widely afield in the British Isles, including Fleetwood in his home county of Lancashire, Guernsey, Whitby, Falmouth, Cornwall, Norfolk, Northumberland and Cardiff.

William Webb sought to break away from the formalised tradition of the 19th century painting, producing atmospheric scenes, by adopting a rather loose technique with soft warm colours and the skilful use of light and shade. A style that was a little ‘avant-garde’ and William Webb struggled during his short life to get the recognition he so rightly deserved.

Saturday Morning, St. Mary’s Gate, Manchester is a unique and superb work by William Webb. One of the few paintings by William Webb, not painted of the sea or coast, but a bustling town scene in his beloved home town of Manchester. He would walk every day from his studio in the town, past the antique shop of his great friend, William Marton in Princess Street to his house in Chorlton-on Medlock. William Webb has painted the street packed with Saturday shoppers and their elegant carriages, stretching far into the distance. There is sheer heart and humanity glowing through this picture, so one feels that he truly enjoyed the execution of this painting. It is a great pity that William Webb that he did not paint more of these scenes, as Saturday Morning shows his distinctive style at its’ very best.

Although William Webb exhibited numerous paintings in his native Manchester, and also at the Royal Academy in London, it was a source of great frustration that he did not enjoy the commercial success, he so rightly deserved – an all too familiar story in the history of art. This combined with health troubles and an unhappy domestic life contributed to periods of depression and sadly, during one of these dark times, and as a final act of total despair, William Webb died by his own hand, in his studio in Manchester in 1903.

Poignantly, an admirer of his art asked at the time ’Will fame which was coming tardily and warily, as fame ever comes, hasten now that the genius who courted it, is dead’. A prediction proved correct, as his paintings are now appreciated and collected with enthusiasm both at home and abroad. A special exhibition of his paintings was held in 1974 at The Old Customs House and Old Solent House in Lymington, celebrating the work of this highly gifted and previously under rated artist.