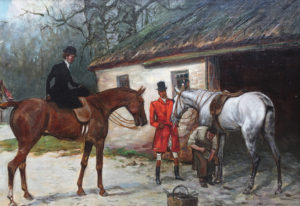 Gilbert Scott Wright was a painter of equine, sporting and coaching scenes who was born on 24th July 1880 at Headingley, near Leeds. 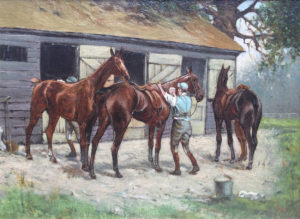 Although he never received any formal training in art, Gilbert probably learned much from his older brother, George Wright, with whom he is thought to have worked until about 1925. During this period they worked together on a number of pieces, which were used for calendars, developing a professional but friendly rivalry.

Gilbert’s subjects included hunting, racing and polo scenes, but it is his coaching scenes, often with figures in period costume, for which he is particularly well known.

During the 1930’s his paintings were used by the Princess Royal for her Christmas cards.

Gilbert Scott Wright Exhibited at the Royal Academy from 1830.