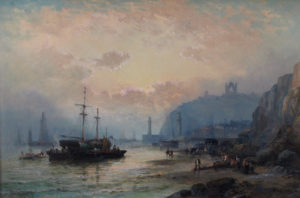 William Thornley was a painter of marines and coastal scenes, who lived in Greenwich and for many years had a studio overlooking the Medway. He painted under the pseudonym William Anson Thornbery and William Anson as well as his exhibiting name ‘Charles Thorneley’. It was under this mantle that he exhibited 53 times at the Royal Academy, four at the British Institution, eight at the New Watercolour Society and 82 times at other venues. 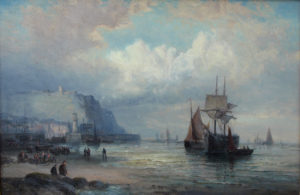 William Thornley’s works are beautifully executed and show a true understanding of the moods of both weather and sea. They are often small in size and painted with fine detail, keen observation and great skill. Many of his coastal views are nocturnal scenes, with the sea shimmering under moonlight or early morning scenes, painted at dawn with a rosy glow illuminating the sky. His fishing scenes are spirited and he painted busy fisher-folk unloading their catch or heavily laden hay barges sailing to their destination.