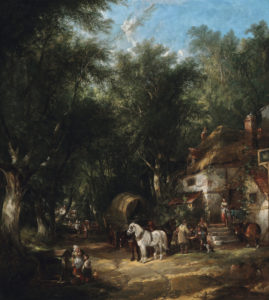 Victorian collectors of paintings are known to have had an almost insatiable taste for depictions of the countryside that portrayed idealised and bucolic rural scenes. Many artists painted them, but amongst their ranks William Shayer Snr. most certainly figured very highly, gaining both great acclaim and high prices for his work during his lifetime.

William Shayer Snr, a Hampshire artist who was born in Southampton and whose love of the skies and landscape of his home county kept him living there all his life, painted landscapes, genre and animals. Technically brilliant and extremely prolific, Shayer early on attracted the attention of Michael Hoy, a wealthy Southampton merchant who extended patronage to the artist. Shayer went on to enjoy a prestigious career, exhibiting 246 paintings in the major London galleries, 388 at the Royal Society of British Artists where he was elected a member in 1829, six at the Royal Academy and 82 at the British Institution.

In The Road Wagon, William Shayer Snr shows off to the full his numerous strengths. This large painting justifiably won acclaim in its time, garnering the Art Union Prize in 1852. In terms of subject matter, this charming rural scene combines a very romantic, intimate scene of people congregating at a village inn, taking refreshment for themselves and their horses. Set in the depths of the New Forest, the intimacy is enhanced both by the dense trees, giving the painting a fairytale feel, and with Shayer’s masterful depiction of light, as it falls through branches, across thatch, and onto the glossy coat of the proud cart horse in the central foreground. The glorious juxtaposition of light and shade in this painting is ultimately what makes it such a beautiful and collectable work.