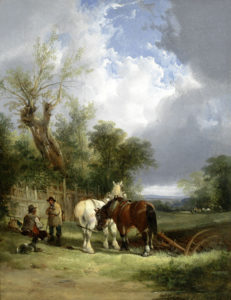 William Shayer was born in Southampton and spent his entire life in Hampshire.  A self-taught artist, he painted landscapes, genre and animals.  He attained great prominence during his lifetime and his works fetched high prices in his day.  He won several Art Union prizes and was a prolific painter, exhibiting many works at the principal London venues.  He exhibited 388 works at the Royal Society of British Artists from 1825 to 1879 and was elected a member in 1829, at the British Institution from 1827 to 1862 and at the Royal Academy between 1820 and 1843.

Shayer worked within the tradition of George Morland and Francis Wheately, depicting idealised rural scenes of an England untainted by the Industrial Revolution.  Colonel Grant described him as ‘the epitome of all that is rurally picturesque’, claiming that ‘beneath sandy banks or in the depths of forest lanes, Shayer will be seen writing in his paints, as truly as the best poet with his pen, the calm but passionate legend – ‘England my England”.

Shayer sometimes collaborated with Edward Charles Williams, another fine painter of the English countryside.  His three sons were all painters in their own right and were greatly influenced by their father.

His works are represented in the museums of Glasgow, Leicester, the Victoria & Albert, London, Montreal and Sunderland