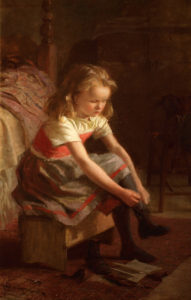 William Pratt was born in Glasgow in 1855 and studied at the Glasgow School of Art. A painter of country subjects, landscapes, marines, portraits and genre scenes, he furthered his studies at the Academie Julian.

William Pratt was influenced by the Scottish painter Sir David Wilkie RA and the Irish artist William Mulready RA, which is illustrated in his work Getting Dressed.  This charming scene shows the young girl, probably preparing to go to school, putting on her little boots, her school book cast aside for the moment, while she concentrates on the task in hand – tying her laces.  The little girl sits on a stool at the foot of an unmade bed, getting ready for school, illustrating that she comes from a middle class family – she has her own bedroom and is able to go to school, rather than help with the household chores, like the children from the villages, where the whole family live and sleep in the same room, with few of the children attending school.

William Pratt enjoyed considerable success during his career, exhibiting at the Royal Academy in London and in Paris at the Salon, where he won an ‘honorable mention’ in 1902.

His work is represented in the Gallery of Modern Art in Venice, and his paintings can be found in the Dumbarton, Crail, Glasgow and Paisley Museums in his native Scotland, as well as the National Museum in Northern Ireland.