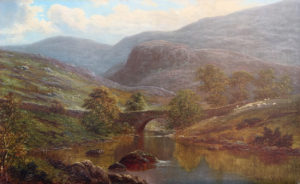 William Mellor was born in Barnsley in 1851, the son of the landscape artist Joseph Mellor. William was greatly influenced by his father’s work, especially in his earlier pictures, in which he tended to paint darker and more autumnal scenes.

Mellor travelled widely and was inspired by the beautiful scenery of his native Yorkshire, North Wales and the Lake District, painting both the calm waters and the flowing waterfalls of the English countryside.

Although he did not exhibit in London during his lifetime, he found great demand for his paintings from the rich Yorkshire mill owners of the late nineteenth and early twentieth century. His paintings were beautifully executed, with trees in full foliage, lining the flowing rivers and casting shadows in the rippling water, lit by the rich English sunlight.  He painted tranquil scenes in summer or early autumn, with cattle watering, sheep grazing and the occasional kingfisher sitting on a rock in the river, a timeless record of the great British landscape.