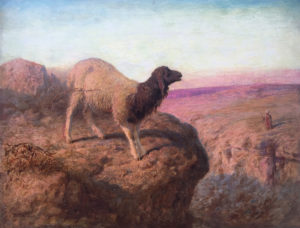 William Webb is an interesting and mysterious figure on the cusp of the Pre-Raphaelite circle. He lived in London, travelled abroad to Dusseldorf, Jerusalem and the Middle East, and exhibited at the Royal Academy 1853-1878, also the British Institution and the Royal Society of British Artists.

The style of William Webbe’s paintings, with their detail and high colour, along with the religious and allegorical content of his works, especially on his visits to the East, declare him as a follower of the Pre-Raphaelite Brotherhood. He was a close friend and much influenced by the work of Holman Hunt. William Webbe’s pleasing little picture of Lambs at Play might almost be taken for the work of the great artist himself.

His earliest paintings are intricate studies of animals, birds and flowers, often with a touch of humour. A bizarre example of this is The Collared Thief, the painting of 1860  showed a cat with its head stuck in a broken bottle of milk. These pictures betray an obvious Pre-Raphaelite influence and it is not surprising that one, The White Owl, exhibited at the Royal Academy in 1856, was noticed by Ruskin in his Academy Notes. At this date Webbe was living on the Isle of Wight, but in 1861, he had a studio in Langham Chambers, in an area where many of the Pre-Raphaelites congregated and had their studios.

In his painting The Lost Sheep, the star of the show is obviously the lone Awassi sheep on a mountaintop, plaintively looking into the distance for his master. A native of the Middle East Countries, the majestic animal is set against a vivid sunset sky, the desolate landscape is bathed in a rosy glow and one can almost feel the heat of the arid landscape of the Holy Land. The tiny Arab figure, emphasises the expanse of the remote desert terrain. This stunning work can be said to resemble that of the Nazarenes, as much as the Pre-Raphaelites.

William Webbe exhibited his first Eastern subject A Shepherd in Jerusalem, at the Royal Academy in 1863 and sent them regularly until 1870, when he showed The Rain Cloud, Palestine. Images of sheep and shepherding continued to dominate his works and these clearly had moral and religious overtones, just as they had for his great friend William Holman Hunt. William Webbe’s works tend to be rare. He showed only twenty pictures in all at the Royal Academy and eight at the British Institution. This fine painting The Lost Sheep, was obviously inspired by William Webbe’s experience in the East, and can be dated to the later 1860s.