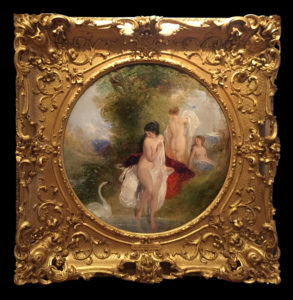 William Edward Frost was the most important follower of William Etty, and like him, was one of the few painters in England to dedicate himself to the nude. Although some of Frost’s works have been attributed to Etty, their work differ in that Etty worked with a rapid brushstroke, while Frost painted with care and deliberation. His figures have a solidity and detailing different to Etty, and Frost gave his girls roundish faces, and tended to to the sentimental, the sweet and the coquettish.

Born in Wandsworth, London in 1810, he was encouraged by his parents to take up painting, after showing an early talent for art. He was put to study under a local artist, a Miss Evatt and at the age of 15 was introduced to William Etty, on whose advice he was sent to Sass’s School in Bloomsbury. After three years there, he entered the Royal Academy Schools in 1829, and began exhibiting there from 1843, being elected an associate member in 1846 and full member in 1870.

Leda and the Swan, a subject from Greek mythology, beautifully illustrates William Frost’s great skill in portraying the pearly-tinted female form. Lionel Lambourne is quoted as saying ‘At their best Frost’s works have a distinctive jewel-like charm, his attractive young women models possessing a pert, self-conscious quality’. It was written in his obituary that ‘Frost painted works of the nymph ideal, in which every leg, finger, and every curve of impossible drapery – not to speak of every face and every bosom  had to be ‘graceful’, ‘classical’, and of course also ‘chaste’ and proper for the eyes of the British matron in her dining room. It is interesting that the Victorians were comfortable with nude painting from the classics and the bible, but not nudity for its own sake and the realistic depiction of the naked model in a contemporary setting.

Leda and the Swan tells the story of how the god Zeus, in the form of a swan, seduces or rapes Leda. According to later Greek mythology, Leda bore Helen and Polydeuces, children of Zeus, while at the same time bearing Castor and Clytemnestra, children of her husband Tyndarius, the Kind of Sparta.. It is a subject that has been painted by many artists, starting with Leonardo da Vinci making studies in 1504 for a painting, apparently never executed, of Leda seated on the ground with her children. In 1508 he painted a different composition of the subject, with a nude Leda cuddling the Swan, with her two sets of infant twins and their huge broken egg-shells.

William Edward Frost enjoyed considerable success during his lifetime and his creations were extremely popular in the form of prints and engravings – P. Lightfoot was one of the most frequent engravers of Frost’s work. His subject matter was rather neatly summed up in contemporary literature as ‘beautiful nymphs, either of wood or water, inhabitants of the pleasant groves of Arcadia, or dwelling in cool sea-caves with the tritons. As well as being a frequent exhibitor at the Royal Academy, he won the patronage of Queen Victoria and Prince Albert.