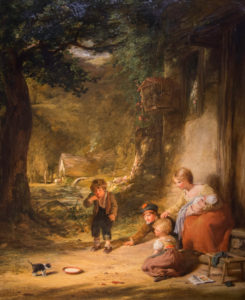 Born in London in 1788, the son of an Irish-born picture dealer and writer, William Collin’s, was an important painter of landscapes, portraits and genre. From an early age he showed a great aptitude for art, and was for a while, an informal pupil of George Morland, before entering the Royal Academy schools in 1807. William Collins exhibited there in the same year and in 1809 he was awarded a medal in the life school, exhibiting another three paintings.

The Stray Kitten, exhibited at the Royal Academy in 1833 illustrates Willaim Collins’ consummate skill in his choice of composition and subject matter. The scene depicts a mother, cradling her baby and her three other young children, sitting on the steps of a white-washed cottage. The mother has broken off from her knitting and reading to the children, to put out a bowl of milk for the tiny stray kitten, much to the delight of her children.  William Collins was a master in the use of light in his paintings and in

The Stray Kitten, he has excelled by faithfully rendering the reflected and scattered light through the trees to illuminate the young family and the kitten in the foreground. The work has great depth and the viewer is led through the painting to another small tableau in the background, with a couple of figures and a horse outside a thatched cottage, beside a running brook. The whole scene is one of domestic contentment, of rural life in early nineteenth century Britain, away from the indutrial revolution, which saw many families leave the safety of the countryside in search of work in the cities, only to find that life there was harch and cruel.

In 1811 his father died and William Collins found himself in the position of chief supporter of his family. Luckily, he enjoyed considerable success and he found some valuable patrons including Sir Robert Peel and other affluent noblemen of the day. In 1815, he went on a sketching tour of the coast near Cromer, and produced a Scene on the Coast of Norfolk which was acquired by the Prince Regent. In 1817 he visited Paris and in 1828 he made a tour of the Netherlands and Belgium. 1836 saw him leave London for Italy, where he remained until 1838. From 1840 to 1842 William Collins was librarian to the Royal Academy and in 1843 he moved to a large house near Hyde Park Gardens. In 1840 he visited Germany and in 1842 the Shetland Islands – the latter journey inspiring him to produce a series of illustrations for Sir Walter Scott’s novel Pirate, which were published in the ‘Waverley’ edition of the book.

As well as commercial success, William continued to exhibit at the Royal Academy, every year from 1807 – 1847 and at the British Institution. In 1820 William Collins was elected a Royal Academician (RA) presenting as his diploma picture The Young Anglers. Today his works are included in the collections of the Victoria and Albert Museum and Tate Britain in London and other regional centres.In the nineteenth century, William Collin’s work was more popular and highly valued than that of the great J M W Turner and John Constable.

William Collins died in 1847, leaving two sons: the elder William Wilkie Collins, the novelist, named after his godfather, the artist David Wilkie and his younger son Charles Allston Collins was also a painter.