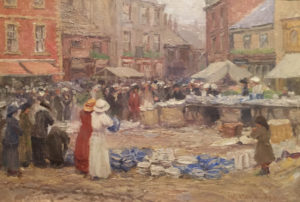 William Cave Day was born in Dewsbury, Yorkshire in 1862. He studied painting in Paris under Bernard Constant and Jules Lefebvre and in England at Professor Herkomer’s School in Bushy.

William Cave Day starting his painting career in St. Ives in 1890, working alongside other like-minded artists at the turn of the century. He exhibited his first Royal Academy painting Gossips in St. Ives, Cornwall that year. William married fellow artist Kathleen Georgina Macellan Day and they lived in Harrogate and Knaresborough, Yorkshire, before returning to the West Country in 1818, where they settled, living in St Ives and Carbis Bay for the final five years of his life, painting across Cornwall up to his death in 1924.

These two charming paintings of Knaresborough Market – The Pot Stall, were painted at the beginning of the Great War in 1916. The atmospheric scenes, depict the bustle of the busy market, which is still held in Knaresborough to this day. Painted, using a cool palette, with a subtle range of muted colours and his fluid brushwork, William Cave Day has produced delightful studies of the country market place. His style is typical of the Newlyn and Staithe School artists of the time, who were influenced by the French ‘plein-air’ painters.

William Cave Day enjoyed considerable success during his life, exhibiting at the Royal Academy, and the Royal Society of British Artists, where he was elected RBA in 1903. A Memorial Exhibition was held at the Municipal Art Gallery, Plymouth soon after his death and at the March Show Day in St. Ives in 1924.