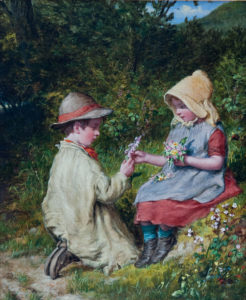 William Bromley (fl.1835-1888) began his career by following in the footsteps of his grandfather, also William Bromley (1769-1842), but soon turned to painting, mostly producing scenes of children playing – often with their pets.

In the work Gathering Wild Flowers, many of the classic characteristics of Bromley’s work can be seen: a precision and attention to detail in the depiction of the lush and verdant landscape as well as an acute sense of composition. In this painting, all eyes are on the wildflower at the centre, framed by the children’s forms.

The moment portrayed here is a powerful one. The children are sharing a romantic moment – he on bended knee, tenderly presenting her with a flower, both children gazing steadfastly at the flower, not daring to meet each other’s gaze. This juxtaposition of innocence with more adult themes was quite typical of the genre, and hugely popular with collectors of the day.

William Bromley’s richly narrative style was very much influenced by the work of the Scottish painter Sir David Wilkie RA and the Irish artist William Mulready RA, both of whom were in turn influenced by the 17th century Flemish School. Bromley enjoyed a good deal of success during his career, exhibiting at Suffolk Street, the British Institution and the Royal Academy.