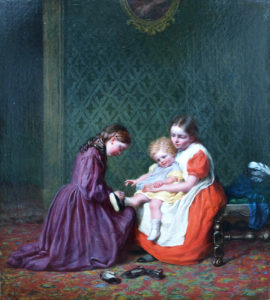 William Bromley began his career by following in the footsteps of his grandfather, also William Bromley (1769-1842), but soon turned to painting, mostly producing scenes of children playing – often with their pets.

In the work Her New Shoes, many of the classic characteristics of William Bromley’s work can be seen: a precision and attention to detail in the elegant wallpapered hall of a typical Victorian villa – the patterned carpet, the heavy carved legs of the chair with a draped coat and feathered hat, indicating that the young girl is changing the shoes of the toddler, in preparation for a walk in the park. The small girl sits patiently on the knee of her big sister, while the eldest girl fastens her shoe. All three girls are well dressed – the younger two with pinafores, while the girl kneeling has a beautiful dress of a rich plum colour and her hair is elegantly arranged with ringlets hanging over her shoulders.

The moment portrayed here is one of tenderness. The two young girls and the infant are getting ready for their afternoon walk, probably after their morning lessons with their governess. These girls are from the new middle class, a family who has made its’ wealth from industry – this subject is rather unusual for William Bromley, who tended to paint more rustic scenes, with children playing outside in the open countryside. However, William Bromley’s rich narrative style is still clearly in evidence.

William Bromley enjoyed a good deal of success during his career, and his scenes of domestic genre were hugely popular with collectors of the day. He exhibited his works in London at the Royal Academy, the British Institution and the Suffolk Street Galleries. Today his charming paintings continue in their appeal to the present day collector – a nostalgic and pictorial reminder of a time gone by.