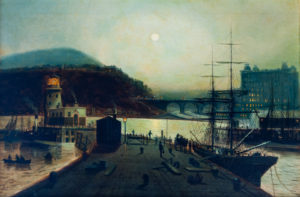 Yorkshire artist Walter Meegan showed his talent early. While still a student at Leeds School of Art he won first prize for a painting of a baby sleeping in its mother’s arms. After marriage, he travelled to the United States and opened a studio on Fifth Avenue in New York where he gained great acclaim and moved in circles appropriate for gaining prestigious commissions. However, the death of his youngest child and his wife’s homesickness meant that the family returned to Yorkshire – first to Leeds and then to Scarborough, where the family settled.

It was at the time of the Meegan family’s return to British shores that Walter Meegan became a pupil of the great Yorkshire painter, Atkinson Grimshaw, studying with him at his Leeds studio. Indeed, Meegan is considered by many to be Grimshaw’s greatest disciple.

Evening – Scarborough Quay is an excellent example of Walter Meegan’s work of this period – Grimshaw’s legacy is highly evident, both in style and theme. This is a masterfully created work, and possibly one of Meegan’s greatest paintings: hugely atmospheric with dusky moonlight on water and warm light from windows and the lighthouse. There is also a great deal of activity from the people in this painting – on the quayside and in rowing boats – and the smoke from the chimneys reminds the viewer that this isn’t just a beautiful landscape, but a working scene.

Like Atkinson Grimshaw, Walter Meegan built atmosphere into his paintings with an electric combination of night light, reflection and human activity. It is for this reason that his work has become increasingly collectible in recent years, with paintings achieving high prices in the UK and USA.