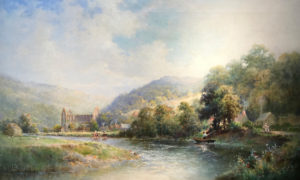 Walter John Bayes was a late 19thand early 20thcentury painter of figures, landscapes, decoration and an illustrator. Born in London in 1869, he was the son of the painter and etcher A W Bayes and the brother of the artist Gilbert Bayes.

This painting of Tintern Abbey, has the delicate look of a watercolour, but is painted in oils, giving it both texture and depth. Walter Bayes has used fluid brush strokes and a cool pastel palette to produce a most charming scene, with the magnificent ruins of Tintern Abbey sitting majestically on the banks of the winding river. A hamlet of small houses, smoke flowing from their chimneys, nestle behind the green trees, cattle are watering at the edge of the river, a mother and young child stand on bank and to complete this tranquil scene, a man sits fishing in his boat at the waters edge.

Walter Bayes started his artistic training in his evenings at the City and Guilds technical college in Finsbury from 1886 until 1900, before attending the Westminster School of Art 1900 to 1902. Walter Bayes began to exhibit at the Royal Academy in the 1890s and also at the British Institution, Suffolk Street and the New Watercolour Society. He was elected a member of the Royal Watercolour Society

Walter Bayes went on to enjoy a varied career in the arts and was very much influenced by the artist Walter Sickert. In 1911 he was a founder member of the Camden Group and in 1913 the London Group. Walter Bayes was the art critic of the Atheneum from 1906 to 1916 and he also contributed to many other periodicals. The Carfax Gallery held a one man show of his work in 1913 and between 1918 to 1934 he was headmaster at the Westminster School of Art. Walter Bayes was a lecturer in perspective at the Royal Academy from 1929 and a director of painting at the Lancaster School of Arts and Crafts from 1944 to 1949.

Walter Byes also wrote books on art – The Art of Decorative Paintingin 1927, Turner of Speculative Portraitin 1931 and A Painter’s Baggagein 1932.