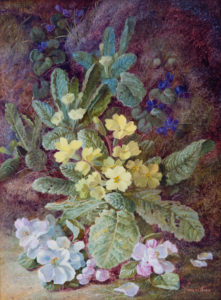 ‘Primrose and Periwinkle’
Signed
Oil on board 12” x 9”

Vincent Clare was a fine late 19th and early 20th century painter from Birmingham of fruit and flowers. He painted in the style of W H Hunt’s small detailed pictures of fruit, flowers, blossom and bird’s nests. He was the son of the still-life artist George Clare and the brother of the artist Oliver Clare. All three artists painted in a similar style painting charming pictures, which are collected with emthusiasm both at home and abroad.

Working in Birmingham at the turn of the century, Vincent Clare does not appear to have exhibited in London during his lifetime, although he did exhibit three works at the Walker Art Gallery in Liverpool between 1888 and 1897.