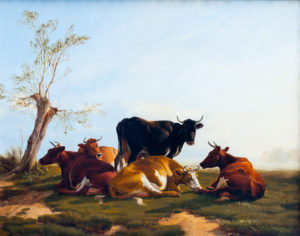 Born in Canterbury in 1803, Thomas Sidney Cooper was a painter of animals and was encouraged by Abraham Cooper (no relative) and Sir Thomas Lawrence.

He entered the Royal Academy schools and in 1827, became a teacher in Brussels and a friend of the Belgian animal painter Eugene Verboeckhoven, who greatly influenced his style, as did the Dutch schools of the 17th century.  In 1831, he settled in London and first exhibited at Suffolk Street in 1833.  He exhibited 48 paintings at the British Institution between 1833 and 1863, and ‘Landscape and Cattle’ which was exhibited at the Royal Academy in 1833, was the first of a series of 266 exhibits shown there until 1902 without a break – a record for continuous exhibiting at the Academy.

Sheep and cattle were his constant subjects, and between 1848 and 1856, he painted cattle in the numerous landscapes by F R Lee and also the animals in landscapes by Thomas Creswick.  After 1870, his commissions were so constant and lucrative, that he was tempted to yield to facile repetition of his favourite themes, but the quality and competence of his style only began to decline in the 1890s, by which time he was an old man.

His work is represented in the museums of Birmingham, Blackburn, Cardiff, Glasgow, Leeds, Leicester, Liverpool, London, Manchester, Nottingham and Sheffield