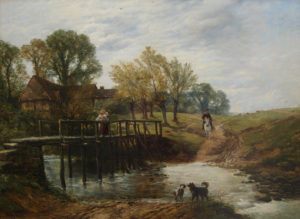 Thomas Creswick was a realist painter of British scenery, chiefly in Wales and the north of England and usually with streams of flowing water.

Thomas Creswick studied under John Vincent Barber in Birmingham, before moving to London in 1828. In London he enjoyed considerable success, exhibiting at the Royal Academy, the British Institution and the Suffolk Street Galleries from 1828. He was elected ARA in1842 and RA in 1851. Thomas Creswick was also favourably criticised by Ruskin, and Reynolds notes that he liked to maintain an overall brown tone and that his work stands out by ‘its integrity and power of construction’.

At the London International Exhibition of 1873, 109 of his works were collected together, accompanied by a catalogue by T.O. Barlow RA. Thomas Creswick is known to have collaborated with his artist friends Ansdell, Bottomley, Cooper, Elmore, Frith, Goodall and others, who introduced figures, cattle and sheep into his landscapes. He was also a book illustrator.