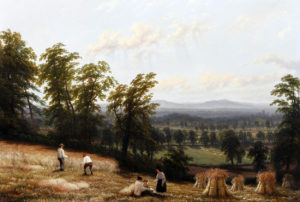 Born in Harbourne, Birmingham, Thomas Baker was a student of Vincernt Barber (1788-1838) at the Barber’ family’s Charles Street Academy in Birmingham. Exhibiting publicaly with the Birmingham Society of Artists from 1827 onwards, he painted landscapes throughout Warwickshire, the Midlands and the Welsh border regions and occasionaly producing depictions of the Lake District, Scotland and Ireland.

Thomas Baker kept comprehensive records of his work and usually signed each major picture ‘T Baker’ and dated it to the year and numbered it on the back. His smaller pieces and pencil sketches tend to be signed ‘T.B.’ (sometimes to be found playfully hidden around gravestones, fenceposts, treeroots etc.) and dated more precisely. His diaries and notes – which contain an 800-strong list of his major works –are  held in the Birmingham City Art Gallery.

This beautifully executed work ’Near Barford, Warwickshire’, painted in 1856 and numbered 513, not only illustrates his ability as a painter of the great  British landscape, with the rolling fields in the distance, under the warm blue skies of late summer, juxtapositioned with the cutlivated, golden hayfield in the foreground, but Thomas Baker’s skill in depicting a typical harvest scene of the period. The tied corn stoops neatly arranged – the farm workers busy with their scythes – one man taking a well-earned break to enjoy his lunch, lovingly brought to him by his wife and daughter.  The whole scene gives a gentle nod to a time gone by, before the revolution in farming methods with machinery and uniform bales of hay – a nostalgic record of the past.

Thomas Baker enjoyed considerable success in his day, exhibiting in London at the Royal Academy between 1831 and 1858 and also at the British Institution and the Royal Society of Birmingham Artists. He also provided artistic tutoring to the local middle classes in order to supliment his earnings from major local patrons such as Lord Leigh. Today, as in the the 19th century, collectors are eager to buy his work and there was even said to be a ‘Baker craze’ in the late 19th century when his paintings fetched outrageous prices.