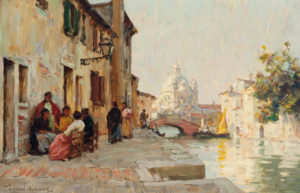 Many of Terrick John Williams finest paintings portray water, allowing him to show off his finely honed technical skills, his sense of light and shadow, his command of colour.

This charming and expertly crafted painting combines an evocation of water with an informal, convivial scene of local life away from the pomp and theatre of the Grand Canal, although with St Marks Basilica in the background, one has the impression that the grandeur of the place is never far.

The scene thus cleverly conveys a sense of the everyday juxtaposed with the exoticism that is Venice – this painting may have appealed to those Victorians who took ‘The Tour’, of which a visit to Venice was an essential component.

Terrick John Williams was born into a successful mercantile Liverpool family. Determined to be an artist, he rebelled against joining the family business and instead travelled to Europe where he studied under Charles Verlat in Antwerp and later at the Academie Julian in Paris, under such masters as Benjamin Constant and William-Adophe Bouguereau.

Williams continued to paint European scenes all his life – he was particularly drawn to the fishing villages and harbours of Northern Europe. He was, however, based at studios at the Blackheath Art Club from 1891, and his presence in London ensured that he submitted works for exhibition at the Royal Academy, the Royal Institute and the Royal Society.