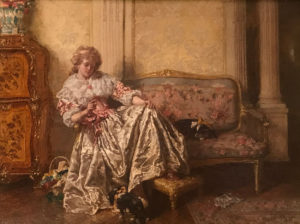 Talbot Hughes was a British painter of genre, history, landscapes, and miniature portraits. Born in London in 1869, the son of the still-life painter William Hughes and the brother of Sir Herbert Hughes-Stanton, a landscape painter.

Talbot Hughes admired the work of the French classist painter Jean Louis Meissonier and this fine painting In Disgrace, with its fine brushwork and meticulous attention to detail clearly illustrates this. Hughes was preoccupied with the refinement of the presentation of his subject, the depiction of idealized feminine beauty, and the art critic Marion Hepworth Dixon commentated on Talbot Hughes’s “dexterity of hand, the extraordinary facility with which he renders the different surfaces of stuffs, woods and metal, together with the agility of his outlook and verve and spontaneity of his eighteenth century designs”. Inspired by his collection of over 750 historical costumes and accessories, Talbot Hughes set many of his paintings in the eighteenth century and he used items from his collection as studio props. In Disgraceis a charming study, depicting a young lady, probably in one of his elegant costumes. She is seated on an empire style sofa with her two pet spaniels, one on the sofa and the other, head bowed in disgrace, being gently reprimanded for taking a piece of fabric from her sewing basket.

Talbot Hughes enjoyed great success during his lifetime, and from 1871 to 1913 he exhibited at the Royal Academy, the Pastel Society and the Society of British Artists, where in 1894, he was elected a member. Talbot Hughes was also a writer on fine art and costume design. In 1913, Talbot Hughes published his book Dress Design: an account of costume for artists and dressmakers, illustrated by the author from old examples. In 1913 rather than send his costume collection abroad, he sold it to Harrods, where it was displayed for three weeks and after this period, Harrods donated the collection to the Victoria & Albert. He continued to donate individual items to the museum up until 1931. In 1988 the Rosenbach Museum & Library in Philadelphia, mounted an exhibition of 30 of his Spanish portrait miniatures