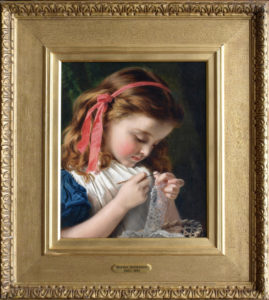 Sophie Anderson was born in Paris in 1823, where she spent her early years, before fleeing France with her family to America in 1848, to escape the ‘February Revolution’. She established herself in America as a successful genre and portrait painter, before marrying the English artist, Walter Anderson. In 1854 they came to England, settling in London, where she began to exhibit her genre paintings at the Royal Academy, the British Institution, Suffolk Street and the Grosvenor Gallery.

In Concentration, Sophie Anderson beautifully depicts the young girl painstakingly at work with her crocheting, making a delicate piece of lace. The viewer can see the concentration on her pretty face, cleverly illuminated from the right side of the picture – a scene of serene innocence. The rosy-cheeked girl is well dressed in a puffed sleeved blue dress with a lace-edged pinafore – her hair held back from her face by a red ribbon. Like most middle class girls of the era, she would have been taught the social and home making skills, preparing her for a ‘suitable’ match, for in the words of Mrs Bennett – ‘It is universally acknowledged that a single man in possession of a good fortune, must be in want of a wife’

Sophie Anderson is a superb artist of her genre, her subjects carefully thought out and beautifully executed. She uses light and shade to highlight her figures and her ability to paint skin tones and features, can be favourably compared to work of the great French artist Bouguereau. Sophie Anderson is best remembered for the outstanding work No Walk Today, which is illustrated in A Dictionary of Victorian Painters by Christopher Wood. It was in the collection of Sir David and Lady Scott and sold in 2008 for £1,000,000, to benefit the Finnis Scott Foundation.

It was around 1871 that Sophie Anderson moved to Capri due to her ill-health and she eventually returned to England, settling in Falmouth and where she died in 1898.