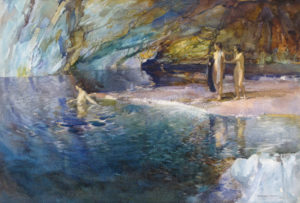 Sir William Russell Flint was without doubt, the greatest water-colour artist of the last century. In a lifetime spanning almost ninety years he enjoyed unprecedented success as an artist, excelling in a variety of media, including etching, drypoint, chalk, crayon, as well in painting in oil and tempera, but it was as a water-colourist that he is best remembered. He had and still has a dedicated following, – he was honoured and admired by his fellow artists, culminating in the honour of a one-man exhibition at the Royal Academy in 1962 – the highest distinction an artist can achieve during his lifetime. Recognition of another kind occurred on the 8th July 1947, when he was knighted for his services to art. Sir William Russell Flint was in good company that day, as theatre and music were also honoured with knighthoods for Laurence Olivier and Malcolm Sargeant.

The Swimmer was painted in 1914, and exhibited at the Royal Watercolour Society – the first year he was to exhibit there and the year he was elected a member. Although he was a regular exhibitor at the Royal Academy, where he was elected a member in 1933, his first love amongst the societies was the Royal Watercolour Society and it was there that he served as their president for twenty years from 1936, and subsequently retained the title of Past President (PPRWS). Flint’s love of the medium of watercolour is best summed up in an essay entitled In praise of Water-colour – ‘…of all mediums men ever invented for perpetuating his desire to create pictures, watercolour is surely the most tormentingly elusive. The great justification of watercolour is that its results can be so delightful in their purity and lasting freshness … it is the best of all mediums because it is direct, luminous and lasting’.

The beautifully executed work The Swimmer, painted early in Flint’s career, was painted before he deferred to his publishes wishes, and he painted this scene from the heart. He has been described as a ‘late sympathiser of the Pre-Raphaelite movement’, which is illustrated in this romantic grotto scene, with three lithe young women preparing to bath in a pool. The jewel-like colours – the topaz blues and emerald greens favoured by the Pre-Raphaelite brethren are simply stunning. Russell Flint shared their love of literature and the classics, painting many scenes from mythology. Flint’s inspiration behind The Swimmer, was probably the Three Graces – the three daughters of Zeus, said to represent beauty, charm and joy. The scene is set in the crystal grotto at Pains Hill Park near Cobham, to which Flint later referred, when discussing his painting, Pauline’s Grotto – ‘ the chance discovery of a beautiful two hundred year-old grotto at Pains Hills, only twenty miles from London, made in grotto-minded for a time’.

The Northern Whig reported that ‘The exhibitions of the Royal Society of Painters in Water-colours are always a joy to the art lover, and the (1914) winter display now open is no exception to the rule. A review from the art critic at The Globe wrote – ‘Mr Russell Flint is another painter who makes a real mark in the exhibition. To his masculine technicalities he is adding s refinement of feeling and a subtlety in selection of subject, which are greatly increasing the range of his art. In such works as The Swimmer the manner of his maturing is very apparent, and the reality of his progress is put beyond dispute’.

Sir William Russell Flint was born in Edinburgh on the 4th April 1880 and on leaving formal education, aged fourteen, he began a six-year apprenticeship as a lithographic draughtsman. He worked for eighteen months as a medical illustrator, before leaving to pursue his main ambition in book and story illustration, and he was commissioned by the editor of The London Illustrated News to provide a series of illustrations for the 1903 Christmas week issue, while at the same time attending the Hatherleys Art School.

After the war, where he served with the RNVR on the development of rigid airships, spending his time in the Isle of Man, Devon and his native Scotland, Flint dedicated himself to his first love – painting, becoming one of the most popular and respected artists of his day. Russell Flint liked to paint ‘plein air’ – scenes in Scotland and France, where he made his annual visit, applying beautifully controlled broad washes over the faintest of charcoal outlines, leaving blank spaces on the paper to fill in the figures at his leisure, upon his return to London.

Sir William Russell Flint died in December 1967, leaving behind a lasting legacy in the art world. As well as his original work, many of his paintings, especially from the period, when he was painting the model Cecilia Green, in her various roles as gypsy, flamenco dancer, washerwomen and aristocratic lady in sumptuous gowns of satin and silk, have been reproduced as limited edition prints. Flint was very strict with the publishers about the quality of the reproductions and expected the very highest standards of printing. His works can be found in many important private and public exhibitions, both at home and abroad.