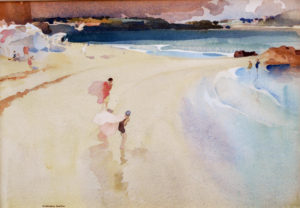 Sir William Russell Flint was without doubt, the greatest water-colour artist of the last century. In a lifetime spanning almost ninety years he enjoyed unprecedented success as an artist, excelling in a variety of media, including etching, drypoint, chalk, crayon, as well in painting in oil and tempera, but it was as a water-colourist that he is best remembered. He had and still has a dedicated following, – he was honoured and admired by his fellow artists, culminating in the honour of a one-man exhibition at the Royal Academy in 1962 – the highest distinction an artist can achieve during his lifetime. Recognition of another kind occurred on the 8th July 1947, when he was knighted for his services to art. Sir William Russell Flint was in good company that day, as theatre and music were also honoured with knighthoods for Laurence Olivier and Malcolm Sargeant.

Blustery Day, St. Malo is a superb example of Flint’s ‘plein air’ scenes, painted on his annual visit to France. St Malo in the twenties and thirties was the ‘playground’ of the rich ‘bright young things’. Its beautiful beach and accessibility to Britain made it an ideal choice for a weekend break. Flint uses fluid brushwork, simplicity of composition and a cool palette to produce a simple study of quietude.

The stars of the show are the two girls, bracing themselves against the wind – the girl in her 1920s bathing suit and swimming cap, towel fluttering behind her, huddles to keep warm, while her companion is yet to brave the waters! Flint uses a dancing economy of brushwork and a subtle range of colours and shadows to portray the Blustery Day in St Malo. The juxtaposition of the more brilliant hue of the sea against the muted tone of the sand is particularly effective. An early critique of the work of Russell Flint commented that Flint ‘is far more successful in presenting things seen. His eye is sensitive to Nature in its various moods, a fact borne out by the splendid landscapes which he exhibited at the Fine Art Society rooms …’

Sir William Russell Flint was born in Edinburgh on the 4th April 1880 and on leaving formal education, aged fourteen, he began a six-year apprenticeship as a lithographic draughtsman. He worked for eighteen months as a medical illustrator, before leaving to pursue his main ambition in book and story illustration, and he was commissioned by the editor of The London Illustrated News to provide a series of illustrations for the 1903 Christmas week issue, while at the same time attending the Hatherleys Art School.

After the war, where he served with the RNVR on the development of rigid airships, spending his time in the Isle of Man, Devon and his native Scotland, Flint dedicated himself to his first love – painting, becoming one of the most popular and respected artists of his day. Russell Flint liked to paint ‘plein air’ – scenes in Scotland and France, where he made his annual visit, applying beautifully controlled broad washes over the faintest of charcoal outlines, leaving blank spaces on the paper to fill in the figures at his leisure, upon his return to London.

Sir William Russell Flint died in December 1967, leaving behind a lasting legacy in the art world. As well as his original work, many of his paintings, especially from the period, when he was painting the model Cecilia Green, in her various roles as gypsy, flamenco dancer, washerwomen and aristocratic lady in sumptuous gowns of satin and silk, have been reproduced as limited edition prints. Flint was very strict with the publishers about the quality of the reproductions and expected the very highest standards of printing. His works can be found in many important private and public exhibitions, both at home and abroad.