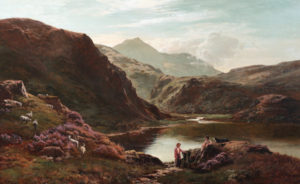 Sidney Richard Percy was the fifth son of the artist Edward Williams, and he began his career when his elder brothers were already established. At first he painted under his family name ‘Sidney Williams’ but at the age of 20, he changed it to Sidney Richard Percy, presumably to avoid confusion with the rest of the renowned Williams family of painters.

Percy married in 1857 and settled his new family in Buckinghamshire at the Regency house, Hill House, where he and his somewhat extravagant wife, Emily, lived in relative splendour, maintaining a carriage and pair and employing an army of servants. Sidney Richard Percy, who was described by fellow artist, William Callow as ‘… of a gentle disposition and a retiring nature’ enjoyed considerable success during this period, exhibiting extensively at the Royal Academy, the British Institution and Suffolk Street.

The Percy family moved in 1863 to Buckinghamshire, where their house overlooked the Misbourne Valley and beech woods beyond. However on the death of the two elder children, they moved to Bickley Lodge, Redhill and then later to Sutton in Surrey.

In the Autumn of 1865, Percy visited Venice, returning home through Switzerland and Paris, but it was the Welsh landscape and scenery that inspired and moved him the most. In particular the villages of Llandbedr and Arthog, which are situated on either side of Mawddach estuary and he would often ride alone to these mountainous regions, away from the usual paths of the visitor. His skilled treatment of the mountains and lakes far surpasses many of his imitators, painted under dramatic skies, with an approaching storm, swirling mountain mists or the rosy glow of a Welsh sunset.

In Loch Scavaig, Isle of Skye, Sidney Richard Percy has really excelled himself by capturing the majesty and tranquillity of the setting, and the isolation of the mountainous region of Isle of Skye, with the waters of Loch Scavaig shimmering in the middle of his painting. Cattle are watering at the loch side and a lone bird skims the waters. The magnificent scenery, with its mist-clad mountains rising in the background, dwarfs the grazing sheep, the young shepherd boy and the girl, pausing to idly exchange a few words. The shepherd boy rests on a mossy mound, with his crook and faithful border collie by his side, chats to the young girl, who has been down to the loch to fetch water, only too glad for some human contact in his isolated work. The purple heather, so reminiscent of the Scottish highlands grows in abundance, adding splashes colour to this wonderful landscape.

In 1886 Sidney Richard Percy fell from his horse and following complications and after a long period of illness, he died. On his death it was discovered that he and his wife had only just been living within their means and his estate left £782. Percy’s widow Emily was supported in her later years by their son-in-law.