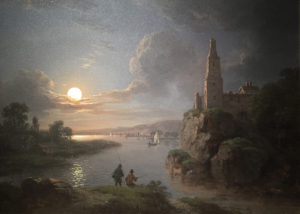 The talented painter of landscapes and moonlight scenes, Sebastian Pether was the son and pupil of Abraham Pether (1756-1812). Both father and son were inspired by the work of the 18th century Dutch masters, whose skilful paintings, illustrating the illuminated effect of the light reflection on the water, they both admired.

The beautiful painting Fishing by Moonlight, is an exquisite example of Sebastian Pether’s work. The painting is painted on panel, a medium best suited to the fine brushwork quality, needed for this intricate work. Sebastian Pether has successfully used the strong use of chiaroscuro effects of light and shade in his painting. The star of the show, is naturally the full moon, illuminating the sky and kissing the clouds, and with the moonlight shimmering on the river below, the artist has created the mysterious atmosphere of the moonlit evening. The buildings are painted in meticulous detail, against the backdrop of the night sky and the two night fishermen are silhouetted against the tranquil waters. A single light in the cottage and the smoke and lights in the distant riverside village, give the only other sign of life in this tranquil scene.

Although Sebastian Pether, enjoyed the recognition for his work, exhibiting in London at the Royal Academy, the British Institution and Suffolk Street between 1812 and 1826, he was driven by the necessity of providing for a large family and he sold many of his paintings direct to the leading dealers of the day. As well as his fascination for moonlight painting, Sebastian Pether also painted fires and other destructive effects of nature and the paintings Destruction of a City by Volcano and A Caravan Passing the Desert Overtaken by a Sandstorm were both exhibited at the Royal Academy. Sebastian Pether also shared his father’s taste for mechanical pursuits, and is said to have suggested the idea of the stomach- pump to Mr Jukes the surgeon.

Sebastian’s son Henry was an accomplished artist in his own right, and although their work has often been confused if not signed, Sebastian’s colours are in general harder and more metallic, in the Dutch manner, whereas Henry’s are warmer and brown in tone. The former also had the edge on quality of brushwork.

Sebastian Pether died at Battersea on 14 March 1844, when a subscription was raised for his family.