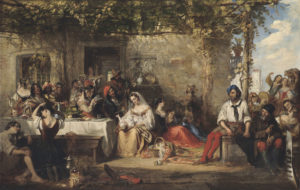 Robert McInnes was an important mid nineteenth century painter of genre. His work is characterised by meticulous drawing, vibrant use of colour and a high degree of finish.

Robert McInnes spent many years of his life in Italy, where he occupied a high position as an artist and during his time there he enjoyed considerable success. His love of Italy and the Italian joie de vivre inspired him to paint some of his finest works. Among these is A Venetian Fiesta, an impressive oeuvre, containing many characteristic figures enjoying themselves, drinking, eating and making merry, in a sun-dappled courtyard of an Italian osteria. The artist has captured the scene beautifully, introducing many varied studies of interaction between the men, women and children in his painting. Using a colourful palette, he has painted all the different sumptuous costumes in great detail. It is not surprising that this painting was exhibited at The Art Treasures Exhibition, held in Manchester in 1857 – an exhibition of fine art, which remains the largest exhibition of be held in the UK, possible in the world.

Robert McInnes returned from to his native Scotland and continued his success, exhibiting in London at the Royal Academy, the British Institution and one of his paintings is in the Glasgow Corporation Galleries. He died in Stirling in 1886.