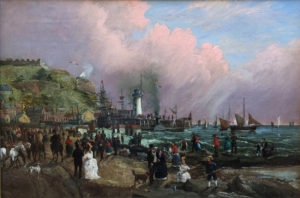 Robert Ernest Roe was the son of the artist Robert Henry Roe (1793-1880). He was an accomplished painter of seascapes and coastal subjects, recorded as living in London and Cambridge.

Robert Ernest Roe had a great love of the north east coastal towns, especially Scarborough, which he painted many times. Scarborough Regatta depicts elegant Victorian visitors to Scarborough watching the annual Whitby and Scarborough Regatta. In the nineteenth century, Scarborough was a fashionable resort for many wealthy Victorians, who went to ‘take the waters’ and enjoy the fresh sea air. Robert Ernest Roe has imaginatively captured the busy scene, with the fine gentlemen, in their top hats and tails, the fashionable ladies, dressed in elaborate bustled dresses and fancy bonnets, as they promenade along the beach, watching the ships and boats compete against one another off the coast.  The children are equally smartly dressed as they dig in the sand, enjoying a day out at the seaside. Scarborough Castle can be seen, nestling high above on the cliffs and the famous lighthouse, which was positioned to warn sailors that the tide has gone out, making the harbour unsafe to enter, stands majestically at the entrance.

The Scarborough and Whitby Regatta began in a small way, with local fishermen competing against each other in their small fishing smacks and salmon cobbles. Then came the yachts, in 1872 competitive rowing came into being and 1874 saw the birth of the Scarborough Amateur Rowing Club. Three years later, in 1879 the Friendship Amateur Rowing club was established and in 1912 the Whitby Amateur Rowing Club – all three clubs are going strong today and the Whitby Regatta is still held annually today.

As well as commercial success in his day, Robert Ernest Roe exhibited in London at Suffolk Street, including a painting of Scarborough Castle.