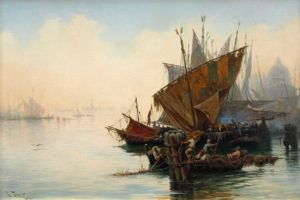 While fin de siecle northern European artists saw Paris, Antwerp or Brussels as their point of pilgrimage, southern Europeans still paid homage to the Italian aesthetic and so it came to pass that a number of Spanish artists found their way to Rome to study and paint.

The Catalan artist Ramon Tusquets Y Maignon was so profoundly influenced by the Italian way of life that he stayed there until the end of his life.

It wasn’t until the death of his merchant father freed him from the world of trade and banking that Ramon Tusquets travelled to Rome, studying at the Chigi Acadamy and establishing contacts with the circle of Catalan artists already based there, including the acclaimed Catalan painter Maria Fortuny with whom he became great friends.

Tusquets went on to become an artist of some stature, exhibiting in Naples, Vienna and Paris during the late 1870s. A decade later he was nominated President of the International Artistic Circle of Rome and subsequently asked to paint the official portrait of Queen Maria Cristina for Barcelona’s Town Hall.

This particular school of artists was, according to the scholar Carlos Gonzalez, concerned with the characteristics of a plein air style of painting, luminosity and realism of theme. Of course, these themes were the preoccupation of many a nineteenth century painter, but the Catalan painters seemed to embrace them particularly whole-heartedly.

In Tusquets’ Fishing Boats, Venice, he took a fashionable subject matter: Venice, populated it with a scene of everyday life and the common man – (so beloved amongst nineteenth century collectors) and saturated the painting with a breathtaking luminosity.

This scene of boats in Venice is filled with action and colour – the net laden bark in the foreground, the gathering in the middleground sat around a fire, the patched, ragged sails and the magnificence of the church behind – and yet in this painting, it is the glorious light, the unashamed luminosity so characteristic of Tusquets that really steals the show.