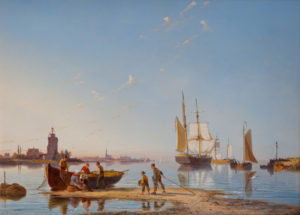 Dutch born painter Pieter Cornelis Dommersen is most famous for his marine subjects and street scenes. His sense of composition was excellent, and he included a great deal of interest and activity in his paintings.

This painting has much to draw the eye – the boats, the people, the buildings in the background, the lines of clouds across the sky, even the seagull skimming the water – it’s full of movement and activity. Dommersen used light masterfully to illuminate his subject matter, and here the light is typically strong and bright.

While Pieter Cornelis Dommersen was Dutch by birth, his family moved to England at the end of the nineteenth century, and he therefore exhibited a great deal in England (although he painted mainly Dutch and European scenes). He exhibited his work at the Royal Academy, the British Institution and the Suffolk Street galleries of the Royal Society of British Artists.