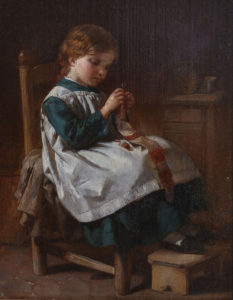 Pierre Edouard Frere was born in Paris in 1819 and commenced his art studies at L’Ecole des Beaux Arts in 1836, studying under Paul Delaroche. He ranks amongst the very best of the nineteenth century European painters of the hugely popular genre of children. It was with reference to Frere, that Ruskin demanded ecstatically ‘Who would have believed it possible to unite the depth of Wordsworth, the grace of Reynolds and the holiness of Angelico’.

Edouard Frere’s painting La Tricoteuseis a charming example of his oeuvre. The young girl sits on a little wooden chair, gently resting her dainty slippered feet on a stool. Dressed in a crisp white smock, she is knitting a cream and red stripped scarf – you can feel  the concentration on her face as she studies her work. Young girls at the time were expected to be proficient in both needlwork and knitting, preparing them for marriage and motherhood – although many girls went to school, they usually left well before their brothers, in order to fulfil their future role in life. The star of the show is undoubtably the young girl and the artist has purposely painted her in a dark muted background to accentuate the little figure – light from an unseen light source illuminates her rosy-cheeked face, her plaited auburn hair and her smock, making the young girl the focal point of the painting. In short, it is a study of childhood innocence and contentment.

Pierre Edouard Frere was highly regarded during his lifetime, gaining many medals at L’Ecole des Beaux arts and in 1855 he was made Chevalier de la Legion d’Honneur. He was of the most famous artist, painting in the colony of French Artists in the town of Ecouen, where he died in 1886. He and his fellow artists chose to paint rural genre, not so much as to lyricise it, as to momentalise, and they found a ready market in the new Bourgeoisie.

Pierre Edouard Frere’s works can be found in the museums of Bernay, Chartres, Cardiff, Glasgow, Hamburg, Louviers, Melbourne and Sheffield.