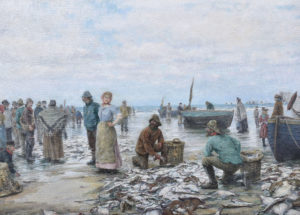 Owen Dalziel was a late 19th and early 20th painter of genre, landscape and marines. He was related to Dalziel Brothers, who founded the famous firm of engravers and illustrators. Originally from Wooler in Northumberland, his father, the artist and illustrator, Thomas Dalziel moved to London, where Owen was born and he lived in Oppians Way, Primrose Hill.

The Day’s Catch is fine example of Owen Dalziel’s work, using soft muted colours and a flowing brushstroke, he has painted a nostalgic scene of an east coast fish market. The fishermen, have returned from their daily fishing trip, are greeted by their women folk and children. They are all helping to unload the day’s catch. The assorted fish are strewn on the quay waiting to be sorted and sold. Painted at the turn of the century, long before the fishing industry was commercialized, Owen Dalziel has beautifully captured the atmosphere of the scene.

Owen Dalziel exhibited his works in the Royal Academy, Suffolk Street, the New Watercolour Society, the Grosvenor Gallery and elsewhere in the provinces.