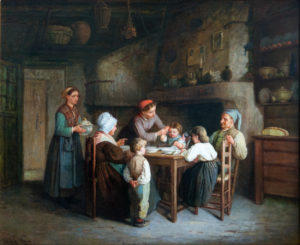 Michel Arnoux was born in Paris in 1883. He moved to Ecouen in order to be a part of the artists’ colony that had built up around his teacher, the realist painter Eduard Frere. He worked there, as Frere did, observing the local people in their everyday environment, and painting narrative domestic scenes of working class life. This immersion in the local community made for paintings with an atmosphere of warmth and tranquility, painted with great sensitivity.

Like Frere, Michel Arnoux often painted children – perhaps engaged in adult activities such as smoking a pipe or holding a gun. His keen observation and interpretation of the characters of his subjects, often at play, in the schoolroom or with the family at home, allowed him to produce charming scenes of rustic harmony.

There was a great appetite amongst the bourgeoisie for such sentimental depictions of the working classes, and particularly of working class children engaged in activities that were self improving, educational or aspirational. For example, in his painting of 1870, Girl Playing With Her Doll, the young girl holds her doll as a woman would her child, as she sits in an armchair by the fire. This would have been seen as good, positive role modelling, the girl preparing herself for a future of motherhood and caring.

Michel Arnoux mostly favoured painting on panel. His work was often on a small scale in pairs. He exhibited at the Salon in Paris from 1864-1877.