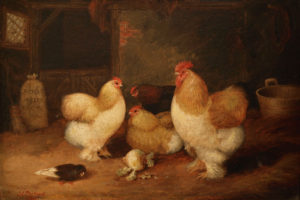 The depiction of farm yard animals has been one of the longest traditions in both Dutch and Flemish art and British artists of the nineteenth century carried on with this popular genre. 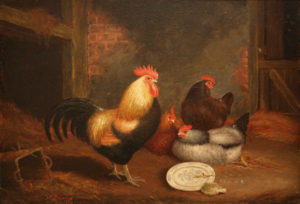 Wealthy patrons longed for images of the life in the unspoilt countryside and the farmyard and there were many artists happy to fill the need – in Engalnd, Jackson was one of them.

Little is known of the life of M Jackson, but his scenes of poultry in a barn and sheep and cattle grazing in the fields – more often in small, meticulously fine detailed pairs, often appear on the market. It is generally thought that he was a Yorkshire artist, as his paintings tend to be found in and around the county, however, there is no question of his love of farm animals and poultry.

The composition of his works and his attention to detail, produce charming paintings and a reord of rural life at the end of the nineteenth century – scenes not seen today with the revolution of traditional farming methods.