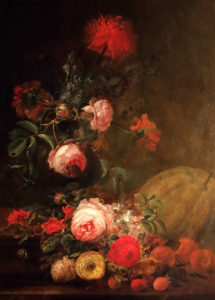 Louis Vidal was born in Marsailles in 1754 and was known for his superbly observed still-life paintings, especially flower pieces. He was inspired by Jan van Os and the eighteenth century Dutch flower painters, who popularised this genre. The technique of Dutch flower painting was codified in the 1740 manual Groot Schilderboerck by Gerard de Lairesses, which gave wide-ranging advice on colour, brushwork, preparation of specimens, arranging, harmony, composition and perspective.

Early still-life paintings, particularly before 1700, often contained religious and allegorical symbolism relating to the objects depicted. However, still-life developed as a separate category in the Low Countries in the last quarter of the 16th century and around 1600, flower painting in oils became something of a craze. Artists in the North found limited opportunity to produce the religious iconography, which had long been their staple, as images of religious subjects were forbidden in the Dutch Reformed Protestant Church, so they turned their skills to still-life painting. The rising Dutch middle classes, who were replacing Church and State as the principal patrons of art in the Netherlands, created a very strong market for flower paintings. Added to this was the Dutch mania for horticulture, particularly the tulip and the popularity of still-life painting soon spread from Holland to Flanders, Germany, Spain and France.

Painted on copper, a smooth medium, best suited to the Vidal’s meticulous brushwork, the artist has painted a beautifully balanced composition. This fine still-life, illustrates the influence of the Dutch masters. Symbolism of flowers had evolved since early Christian days. The rose – Virgin Mary, transience, love, the poppy – power, sleep, death, the gourd – longevity and durability. As for the insects, the snail symbolizes rebirth and the beetle persistence and stability. Louis Vidal has captured in this painting all the elements of the genre of fine flower painting.