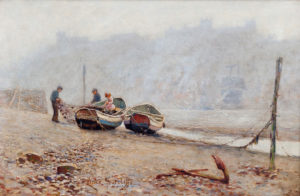 Born in Heptonstall in 1848, Lester Sutcliffe was a fine painter of landscapes and coastal scenes. He painted frequently in Whitby, where he lived there for many years, capturing scenes of fisher-folk going about their work against misty backdrops from which the town softly emerged.

‘Tending the Nets, Whitby’ is a terrific example of Sutcliffe’s work. The eye is drawn into the painting in such a masterful way – through the foreground detail of pebbles on the beach, to the colourful boats themselves and the fishermen hard at work repairing them. The girl sat in the boat in her colourful dress and hat provides an element of intrigue – who is she? why is she engaged in such a menial task while dressed so beautifully? Ships in the harbour and the cliff-top with its abbey ruins are visible through the mist, adding to this painting’s beautiful sense of mystery.

Sutcliffe exhibited with the Newlyn artists later in his career, and married the flower painter Elizabeth Trevor. He also spent twelve years designing and painting stage sets in Liverpool and Birmingham. A keen traveller, he studied painting in Italy and France and exhibited widely, in Birmingham, Manchester, London (Royal Academy, Royal College of Art, Royal Society of British Artists) and Liverpool (Walker Art Gallery). His work can be found in public collections in Leeds and Whitby.