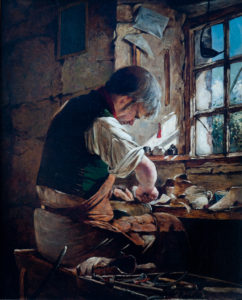 The lives of the working classes were an endless source of inspiration for Victorian painters. Mostly scrubbed up and idealised, potters, seamstresses, pedlars, shepherds, crofters – and particularly farm labourers and fishermen were represented by countless artists of the time.

Joseph Henderson’s painting, ‘The Cobbler’, lies firmly within this genre, a window on the life of a working man in his workshop, with its hard bench, unplastered walls, cracked panes of glass in the windows. He is busy, intently immersed in his work, something that the Victorian bourgeois audience for these paintings would have approved of.

Joseph Henderson, born in 1832 in Stanley in Perthshire, was considered one of Scotland’s finest artists in his own lifetime – he initially made a good living painting portraits. His later work, influenced by McTaggart and the Scottish impressionists was looser and more impressionist in style, and Henderson painted country and coastal scenes, working ‘en plein air’.

He studied at the Trustees Academy in Edinburgh, before leaving in 1852 and settling in Glasgow, where he remained for the rest of his life. Joseph Henderson began his art career in 1852 when he submitted a portrait of himself to the Royal Scottish Academy. His painting, Ballad Singer, was exhibited at the Royal Scottish Academy in 1866 and from this point onwards his reputation as Scotland’s foremost painter was secured.

Joseph Henderson was a member of the Glasgow Art Club, the Royal Glasgow Institute of the Fine arts, and the Royal Scottish Society of Painters in Water Colours. He was an enthusiastic angler and player of golf. He exhibited at the Royal Academy from 1871- 86 and in Suffolk Street from 1882-84. He died in 1908, leaving two sons who were both fine artists.

‘The Cobbler‘ is to be included in a forthcoming book being written by Hilary Christie-Johnston, about Joseph Henderson, with a chapter on his sons, John and J.Morris Henderson.