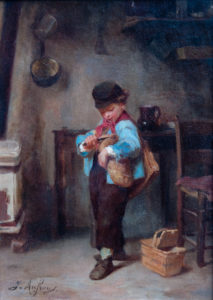 There was little the nineteenth century art buyer liked more than a painting of an adorable pink cheeked child. Which is presumably why Joseph Athanase Aufray enjoyed great success in his artistic career, for the mainstay of his subject matter was charming portraits of children.

This genre was developed by painters such as Frere, Duverger, Dargelas, Arnoux and Dansaert, who, like Aufray, worked from the artists’ colony of Ecouen, just outside of Paris. These artists, and others within the commune, painted cheerful domestic compositions of home, family and especially children.

In Preparing for School, Aufray depicts a confident and healthy looking lad helping himself to a chunk of bread as he gets ready to walk to school. Aufray, like other artists at Ecouen, wanted to capture ordinary working class and middle class existence without excess of sentimentality or moral commentary.

Aufray, who was born in Paris in 1836, was a pupil of Barrias. He exhibited regularly at the Paris Salon between 1865 and 1876 and was represented for the last time in 1885. In 1873 he sent several paintings to ‘L’Exposition de Cologne and he also exhibited in London at the Royal Academy in 1876