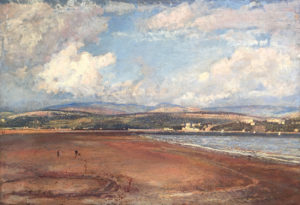 Born in Sevenoaks, Kent in 1843, Buxton Knight was a fine painter of the English landscape, in both oils and watercolour.

Buxton Knight started his career as a schoolmaster, and painting was still only a hobby. However, he left this post and entered the Royal Academy School, devoting himself entirely to his true passion – painting. In 1861 he had his first painting accepted hung at the Royal Academy in London, which was followed by almost annual exhibits at the Academy until 1906. Buxton Knight was an advocate of painting ‘plein air’ and he was aware that landscapes produced in a studio gradually tend to possess an indoor appearance. To Buxton Knight, skies may fairly be described as the keynote of landscape painting and using bold fluid brushstrokes, and revelling in the exercise of free flowing line provided by oil paint, he produced some marvellously atmospheric works. It was during the period 1893 – 1897 that he travelled to the Lake District and painted a series of landscapes, of which eight were exhibited in the Royal Academy

Buxton Knight enjoyed considerable success during his lifetime, exhibiting in London, and Paris, where he won a bronze medal in 1889. He was elected a member of the Royal Society of British Artists and of the Cambrian Academy. Buxton Knight had many wealthy patrons and the Chantrey trustees bought Knight’s ‘December’s Bareness Everywhere’ for the nation in February 1908. There is also a reference to Buxton Knight’s fine work by Soames Forsyte, who was a collector of art, in John Galsworthy’s novel, The Forsyte Saga.