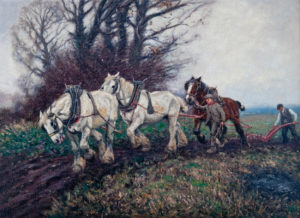 During the nineteenth century, the lowly peasant was relegated from minor character to main protagonist by many painters. John Rabone Harvey specialised in this genre: nostalgic and often downright sentimental portrayals of rural men, women and children employed at graft, highly influenced by French Impressionism and playing to the sensibilities of the bourgeoisie, who liked to adorn their walls with images of the rural idyll.

In ‘Their Daily Toil’, Harvey shows the labour-intensive nature of these men and beasts at work. The ground to be ploughed is rough and uneven, the horses clearly working hard, the weather, as evidenced by the bleak and blown trees behind, is blustery. Harvey seemed able to bridge the gap between realism and romanticism, depicting the archetype of the peasant, hard working, natural, close to the soil.

John Rabone Harvey studied at The Slade, lived and exhibited in Birmingham and was a Member of the Royal Society of Birmingham Artists. He also exhibited in Liverpool and London (Royal Academy) and with the New English Art Club, a centre for French influence and impressionism founded in 1886 by a group of young artists modelled on the French Salon des Refuses. New English Art Club also included in its ranks HH La Thangue, George Clausen, Whistler and Wilson Steer.