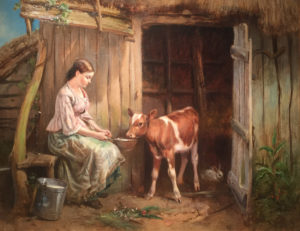 John Henry Dell was a London landscape and rustic genre painter, who exhibited at the Royal Academy from 1853 to 1875, the British Institution from 1851 to 1867 and at Suffolk Street. He is listed as having an address at New Malden, Surrey.

John Henry Dell was one of the numerous nineteenth century artists who perpetuated the idyllic view of the countryside, that the newly rich merchant, forced to spend his working life in urban surroundings, craved to have created for him. John Henry Dell’s charming paintings are usually small, and executed in meticulous detail. He sympathetically painted rosy-cheeked children playing or going about their daily chores, feeding the animals, collecting firewood and fetching water.

Feeding Time is a superb painting by this artist, unusually large for a work by John Henry Dell, and it depicts a pretty young girl patiently feeding the doe-eyed calf a ladle of milk from her tin pail. A pet rabbit can be seen nestling in the straw-strewn barn, behind the young calf – it is a nostalgic scene of domestic quietude, of a time gone by.

Titles at the Royal Academy include “A Rustic Nursery”, “A Farmyard Corner” and “Cottage Cares”.