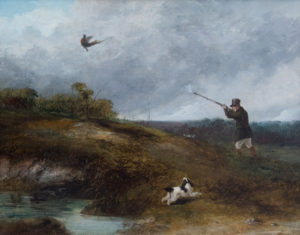 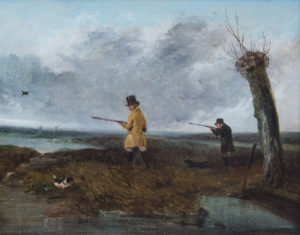 Known as ‘Fred’ to his family, John Frederick Herring Jr. grew up, surrounded by fine paintings and wealthy patrons and he developed at true passion for painting. This inherited ability, and love of painting, was also shared by two of his brothers, Charles and Benjamin. The three brothers all became artists, painting in the same style as their father, enjoying considerable success.

In 1830, he family moved from Doncaster, and although Fred certainly assisted his father while living at Six Mile Bottom near Newmarket between 1830 and 1833, he did not accompany the rest of the family when they later moved to London. It has been suggested that father and son quarrelled over the similarity of their work, and Fred Herring did not begin to exhibit his paintings at the Royal Academy, the Royal Society of British Artists and the British Institution until 1863, in order to avoid further conflict with his father.

John Frederick Herring Jr. continued painting sporting and animal paintings, in the tradition of his father. It was after 1836, possibly feeling threatened by his son’s ability and growing popularity, that Herring Sr., started to add ‘Sr’ after his signature. As time went on, the son’s work progressed and his style evolved and changed, with him adopting a looser brushwork, establishing his own identity. The farmyard and pastoral scenes, with farm animals became synonymous with Herring Jr and it was these idealised paintings that found eager art collectors and patrons, keen to furnish their grand houses with nostalgic scenes from the great British countryside.

Shooting Pheasant and Shooting Duck are particularly fine and rare early examples of Fred Herring’s paintings and illustrate the similarity to his father’s work. Painted around 1840, Herring Jr. uses a fine brushwork quality and attention to detail, resulting in a beautifully balanced pair of shooting scenes. The men, in top hats, frock coats, breeches, and high leather boots are accompanied by their faithful spaniels, the latter obediently flush out the game for their masters to shoot.

John Frederick Herring Jr. married the artist Kate Rolfe, the daughter of the angling and sporting painter Alexander Rolfe. Fred Herring is known to have collaborated with his father-in-law and with other fellow artists, painting the animals in their paintings.