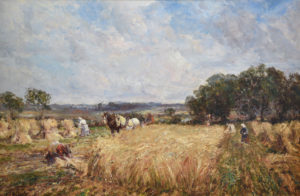 John Falconer Slater was a Northumbrian artist of landscapes and seascapes and is recognised as being one of the earliest British artists to adopt the Impressionist technique of painting.

He initially worked as a bookkeeper for his father’s corn mill and he then ran a store in the diamond fields of South Africa before turning to art as a career. He was a member of the Berwick Club and President of the North East Art Club, which was based in Whitley Bay, and also a member of the Cullercoats Colony. John Falconer Slater spent his last twelve years in Cullercoats, where he became expert at depicting the many moods of the North Sea.

Harvesting is a particularly fine work, illustrating John Falconer Slater’s mastery of the impressionist technique, with a flowing brush stroke and effortless application of impasto to give texture to the corn.  He has painted the cornfield under a beautiful summer sky, dotted with white fluffy clouds and in the distance, you can see farm buildings and a solitary wind mill. The scene is one of nostalgia, of a time gone by, when men harvested the crop with the horses, and the women tied the corn into tidy sheaves, before the autumn weather sets in.

John Falconer Slater enjoyed great success during his lifetime and he exhibited widely on Tyneside, as well as Liverpool, Manchester and 22 works in the Royal Academy in London.  His work is held at the National Maritime Museum, in Greenwich, the Laing Art Gallery, in Newcastle and the Shipley Art Gallery, in Gateshead