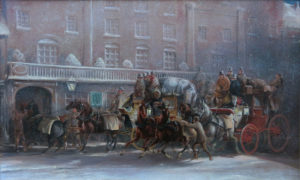 John Charles Maggs was born in Bath in 1819, where he ran a school of painting at his studio in 34 Gay Street. His genre of painting was coaching scenes and although he never exhibited in London, he was widely patronised by lovers of coaching scenes, including Queen Victoria. His work enjoyed great popularity at a time when there was much interest in such vivid reconstruction of the ‘romantic past’. Other subjects he painted include Newmarket Races, Robbing the Mails, The News of Waterloo and the Market Place at Bath. The period he illustrates spans two centuries – from the days before Hogarth, to the end of the reign of William 1V. 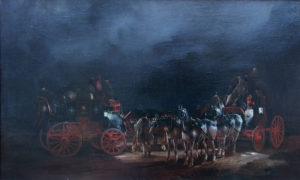 John Charles Maggs came from an artistic family – his father James was an artist and furniture jappaner, his uncle a portrait painter and his daughter assisted at his studio, known as the Bath Art Studio

Like fellow artist Charles Cooper Henderson (1803-1877) he carried the tradition of coaching painting well into the railway age. He is particularly fond of painting coaches in snow or at night.