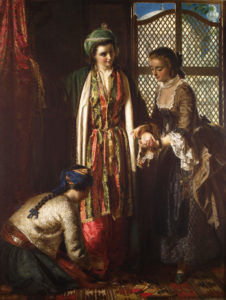 Jerry Barrett was painter of genre, historical and literary themes, who admired the achievements of feisty women of their day. His two most famous works, The Mission of Mercy: Florence Nightingale at Scutari and The Queen’s First Visit to her Wounded Soldiers hang in the National Portrait Gallery in London. It was during his stay in Scutari, that he gathered the material for his painting of Lady Mary Wortley Montagu, the wife of the British Ambassador in Constantinople.

Lady Mary was a great writer of poetry and letters, observing Eastern life, especially, the private lives of Islamic women, as they were utterly closed to males – she is credited with being an inspiration for subsequent female travelers/writers, as well as for the emergence of Orientalist art and fashion – more importantly she broke convention with her pioneering of a smallpox inoculation, a course of action unparalleled in medical advance up to that point.

The letter from Lady Mary to her sister, the Countess of Mar, written from Adrianople in 1717, vividly describing herself in her Turkish habit and the women of the Ottoman Empire, was the inspiration for work Lady Mary Wortley Montagu in Turkey – she writes about the first part of her dress being ‘a pair of drawers, very full that reach to my shoes, and conceal the legs more modestly than your petticoats. They are of a thin rose-coloured damask. My shoes are of white kid leather, embroidered with gold’. She goes on to write that ‘The curdee is a loose robe they throw off, or put on according to the weather, being of rich brocade (mine is green and gold) either lined with ermine or sable. The head dress, is composed of a cap, called a talpock, which in winter, of fine velvet with pearls or diamonds, and in summer, of a light shining silver stuff. This is fixed to one side of the head, hanging a little way down with a gold tassel, and bound on, either with a circle of diamonds (as I have seen several) or a rich embroidered handkerchief. The hair hangs at its full length behind, divided into tresses’.

Jerry Barrett displays great admiration for the women in his paintings, Lady Mary, Florence Nightingale, Queen Victoria and, also in another of his celebrated works Mrs Fry Reading to the Prisoners in Newgate. Painting in a vaguely ‘Raphaelesque’ style, he produced historical works of unparalleled accuracy and beauty.