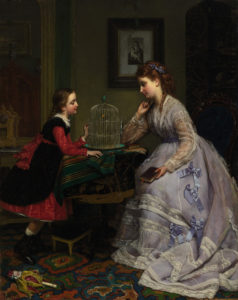 The father of Edward and Gerard Portielje, Jan Frederik Pieter Portielje was a Dutch painter of genre and portraits. Born in Amsterdam in 1829, Jan Frederik Pieter Portielje travelled widely in France and Germany and was best known for his paintings of elegant and sophisticated women in fashionable interiors and was a highly successful portrait painter. He also worked in collaboration with artist such as E R Maes and Frans Lebret.

In Jan Frederik Pieter Portielje’s The Song Bird, the artist has illustrated his undoubted talent and virtuosity in the highly finished details of the furnishings of the salon and the mother and daughter’s dresses, in the rich scarlet water-marked silk of the young girl’s dress and sash and the soft lilac colour and lace details of the mother’s gown, with its’ sheer sleeves and ribbon detail. The tableau is beautifully composed, centring around the focal point of the painting – the song bird in its’ gilded cage. The girl, with her neatly braided hair, a discarded puppet at her feet, has just removed the green-stripped night cloth, and both she and her mother, the latter pausing from her book, are both eagerly awaiting the bird’s sweet song. During the nineteenth century it was very fashionable to keep caged birds and this bird is from the Oriole family, birds noted for their colourful plumage and cheerful singing. The painting gives us a glimpse into the privileged life of the bourgeoisie in nineteenth century Europe.

Jan Frederik Pieter Portielje studied in Amsterdam at the School of Art under J Bing and in Antwerp under Dyckmans. He worked a great deal in the Netherlands and perhaps even more for the United States. Jan Portielje enjoyed great acclaim during his lifetime, participating successfully in numerous exhibitions in Holland, Belgium and abroad. He was a widely collected artist and his paintings continue to be highly sought after today, both at home and abroad.