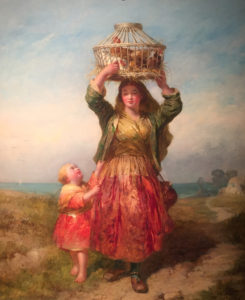 James John Hill was a painter of landscapes, rustic genre and portraits but more widley known for his fantasy subjects of pretty smiling peasant or fishergirls, either singly or in groups with landscapes or seascape backgrounds.

James John Hill was born in Birmingham, where he studied before coming to London in 1839.  He exhibited at the British Institution, being elected a member in 1842 and also at the Royal Academy 1854-1868.  He enjoyed considerable success during his lifetime and one of his patrons was Lady Burdett-Coutts, for whom he painted many portraits, animal and dog studies.  He frequently visited Ireland, inspiring him to paint his coastal scenes with fisherfolk at work on the beaches – mending nets, fishing, collecting cockles and oysters.

Going to Market is a lovely study of a fresh faced young mother, slowly making her way to Market, a cage of hens on her head, and with her rosy cheeked toddler, tugging at her clothes, hoping to be carried. The young woman, serenely looks ahead, ignoring the youngster’s pleas, unable to carry both her child and the hens. In the background, her humble farmhouse, nestles behind her, overlooking the coast, and on this bright day the scene appears idyllic, but in reality life would have been very hard for the young mother and her family, especially in winter. Going to Market is a nostalgic painting of a time long gone, of peace and quiet solitude.

James John Hill’s pictures were often reproduced lithographically for the Illustrated London News.  He sometimes collaborated with the artist Henry Bright (1814-1873), painting the figures in his landscapes.