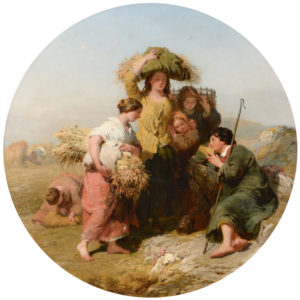 Born in Birmingham, where he studied before moving to London in 1839. James John Hill exhibited at the Royal Academy between 1845-68, the Royal Society of British Artists, and also at the Royal Institute.

The Gleaners is perhaps one of James John Hill’s finest and most significant oeuvre as an artist and it embodies some of his most successful and characteristic attributes, together with a poetic affiliation of light social realism and a vaguely mythological overtone.

Gleaning is the ancient act of collecting left-over crops from farmers’ fields after they have been harvested. It was performed throughout history as a method of providing welfare to lower classes and has played a vital role within the circle of life; allowing the harvest to give new life, or perpetuate life in another

In James John Hill’s work, the pyramid shaped figure group, comprising of his signature pretty, rosy cheeked peasant girls and children, hold sheaths of gleaned corn proudly, which are finely painted and given lofty positioning with particularly brilliant and dexterous brushwork. They are flanked by a young, languorous shepherd boy, leisurely leaning into the arrangement, and holding his alluring pan pipes to his lips. As the painting recedes towards the horizon, other figures can be seen bent over, task in hand, working in a progressively hazy and atmospheric atmosphere. This is suggestive of high summer heat and the drawing near of the end of the season, the fruits of it now in abundance, and with autumn and the inevitable long winter to follow.

ln France, the social realist painter Jean-Francois Millet produced a ground breaking and mildly socially provocative depiction of the lowest ranks of rural society undertaking the age old tradition of gleaning in 1857. Whilst there is clearly a relationship in subject matter between the two works – the overall effect of each is quite different. Hill’s slightly earlier work moderates the emerging contemporary socialist perspective with the use of a rich and vibrant palette, the countenance of the key figures belies no oppression and the introduction of the young peasant boy alludes to the God Pan, through his attribute of the pan pipes. Traditionally recognized as the God of the Fields, his presence introduces a more frivolous and potentially seductive feel to the work, but also a nod to the divine and the sacred – specifically of pagan roots. The message of continuity and the cyclical ways of life and nature is further compounded by the use of a tondo or round canvas by the artist, and the work overall shows him at the height of his creative powers.

James John Hill enjoyed considerable success during his lifetime and one of his patrons was Lady Burdett-Coutts, for whom he painted many portraits, animal and dog studies. He was elected a member of the Royal Society of British Artists in 1842. His pictures were often reproduced lithographically for the Illustrated London News. James John Hill is also known to have collaborated with the artist Henry Bright (1814-1873), painting the figures in his landscapes.

Exhibited at the Royal Society of British Artists in 1851, The Gleaners was later presented to The Lyceum Gentlemans’ Club, Liverpool on 10th November 1891 by William Preston Esq, a former mayor of Liverpool. The club was sold to the Post Office in 1984, and subsequently this remarkable work was discovered at a hotel in Florida, and returned to England, still framed in its magnificent, original frame.