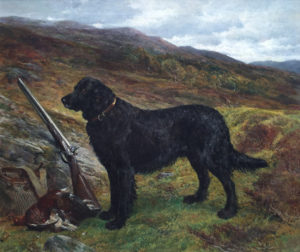 John Sargent Noble was a celebrated London painter of animals and sporting subjects. He studied his genre at the Royal Academy Schools under, arguably the finest animal painter of the nineteenth century – the great artist Sir Edwin Landseer, animal painter to Queen Victoria.

The wonderful oeuvre A Old Friend illustrates Noble’s expertise in the exacting art of animal painting. This fine painting was painted in 1891 for a George Orme Esq. and is a portrait of his beloved dog. The work would not have been possible without the precedent of Landseer, who introduced a sentimental note into his paintings. The faithful dog is painted, majestically guarding the day’s bag as he patiently awaits his master’s return.

There is no less attention to details in Noble’s painting of the scenery, the bracken-clad moors, with the rolling clouds and autumnal mist on the horizon. The undulating moors make a perfect backdrop to the scene, setting off the real star of the show – the retriever – the Old Friend.

The retriever was especially bred as a shooting dog and a great favourite of nineteenth county gentlemen. These handsome dogs have ‘soft mouths’, and a great willingness to please, learn and obey. They are faithful companions to their masters and John Sergeant Noble has managed to portray this in the stance and look of the faithful dog’s face, as he stands to attention by the gun, bag and game.

John Sargent Noble enjoyed not only commercial success during his lifetime, painting the animals of his wealthy patrons, but the respect of his peers, as he was elected a member of the Society of British Artists in 1867. He also exhibited almost continually at the Royal Academy from 1866 until his death in 1896.